The Environmental Impact of Blockchain Technology

Cryptocurrency, Blockchain, Bitcoin, data mining, … These trending buzz words can be heard virtually everywhere: In financial discussions, the business world, universities and so many more instances.

But what do these terms actually mean? And how do they impact the climate crisis?

In order to try and answer these questions, we need to gain a better understanding of the basics.

As a whole, cryptocurrencies, in contrast to traditional currencies, are not backed by tangible assets or securities – at least one part maintains real support.

They are digital currencies that are generally not issued by governments – therefore unregulated – and are secured by cryptography, a method of storing and transmitting data in a particular form so that only those for whom it is intended can read and process it. It protects data from theft or alteration, but can also be used for user authentication.

Many of the cryptocurrencies are based on blockchain technology: “a distributed ledger enforced by a disparate network of computers”.

Cryptocurrencies are usually traded but can also be used to buy goods and services.

Bitcoin, the most popular cryptocurrency, has had very volatile prices, often losing or gaining in value in short periods of time. This volatility also presents several challenges, however it’s out of our article scope.

Instead, we want to focus on the environmental impact of blockchain technologies that are the backbone of cryptocurrencies such as Bitcoin, Ethereum, XRP, Cardano or Stellar, among others.

For this, let’s take a look at how blockchain works. Simply put, it is decentralized and manages transactions and records them. Once recorded, data cannot be altered.

One aspect of this technology is the process of data mining, where the network of computers uses algorithms to confirm transactions.

The environment comes into play when looking at the high-speed computers that form part of the network. Naturally, these consume a huge amount of energy.

In fact, according to the University of Cambridge Electricity Consumption Index, if it were a country, the Bitcoin system alone would be the 34th largest consumer of electricity.

This shocking fact highlights the environmental cost that is often overlooked.

However, public figures are starting to acknowledge the impact by refusing to accept Bitcoin as payment until the carbon footprint is improved.

Vitalik Buterin, the creator of the second largest cryptocurrency called “Ethereum” also mentions his concerns regarding the carbon footprint.

The True Cost of Cryptocurrencies

Now, someone who is very environmentally-conscious might want to defend trading cryptocurrencies by arguing that it could replace other types of currencies which may use a lot of paper for example.

Despite this argument, cryptocurrencies will most likely not replace traditional currencies in the near future.

Therefore, their environmental costs are simply on top of already existing emissions.

As can be seen in the graph below, the difference is quite shocking 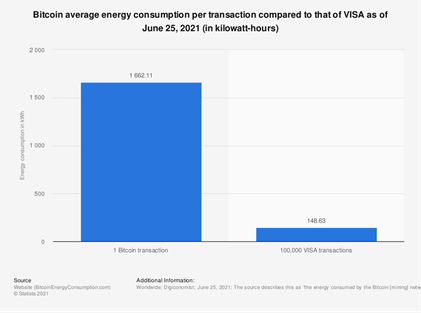 Depending on the source of energy that is used for the mining process, carbon emissions will arise. This is one of the main reasons why blockchain technology is threatening the global climate and needs to be based on renewable energy.

Unfortunately, even the use of renewable energy presents disadvantages. For instance, the technology might take away energy available to other, local communities.

Crypto currencies also lead to electronic waste, as much singular purpose hardware is used in the process: this hardware becomes obsolete and ends up as waste.

Due to the competitive and racing nature of data mining, newer machines replace the “old” ones when they are more efficient.

This separate issue cannot be solved through generating renewable energy.

Finally, something should change – otherwise, this incredible technology has the potential of damaging the planet much more than it already is.

At times like these, sustainable developments should be achieved in all areas of life, and this technology is currently counter-productive to the desired goals.

But Now We Would Like to Know your Opinions:

This chapter: “Things are looking up for the fashion world” revolves around textile waste, upcycling, and innovative clothing-production approaches

Two-Wheels, Four-Wheels, Rail or Air? How you travel on holiday and why diversifying your methods can benefit your trip.